Are soft skills the mark of a successful leader? This was the topic of debate at the Women of Influence Annual Great Debate 2019 held at RACV Royal Pines Thursday 13 June.

The event was a sell out once again and as is evidenced by the photos from the day, there were many laughs and even a standing ovation!

The opposing team had a true challenge on their hands, particularly coming from industries where soft skills are vitally important!

Together with team members Claire Thurwood, CEO of Robina Private Hospital and Scott Lyall, COO of Burleigh Brewing Co. they posed the question: “Do you prefer it soft or hard?”

The affirmative team delivered images of leaders, emotional, heartfelt stories and hilarious (and often controversial) arguments to demonstrate the importance of EQ – despite their banking and legal backgrounds.

But it was Lawyer/Stand-up comedian Petrina Macpherson (Minter Ellison) who was the final speaker on the affirmative team who delivering the funniest presentation we have heard in years resulting in a standing ovation from many of the entire 200 guests.

The official Judge – John Morris General Manager of RACV QLD Resorts did his best efforts to cover all bases but found the scores to be even – so it was up to the audience to decide and the decision was made in favour of the affirmative team.

Well done to the WOI committee who put on another wonderful event, which ran smoothly, finished on time and treated guests to fabulous food, brilliant entertainment and wonderful prizes.

Local charity partner RADFLY launched their Christmas in July campaign and were presented with a $10,000 cheque which was from proceeds of previous events raised with the support of sponsors and raffle ticket sales.

Plus, we heard from Year 12 school student Tayla Forbes, winner of the International Women’s Day Youth Leadership award in IT Innovation, about her business Funky Fuel Caps. Tayla’s Mum Nina is the founder of Women in Finance and has been a huge supporter of Women of Influence.

Connecting, motivating and entertaining businesswomen is what these events are all about!

Mark your diary for the next exciting Women of Influence event, Friday 20 September. 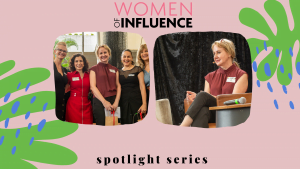 You may have seen Lisa up on stage at our last event for International Women’s Day.  In addition to being a business owner, Lisa has 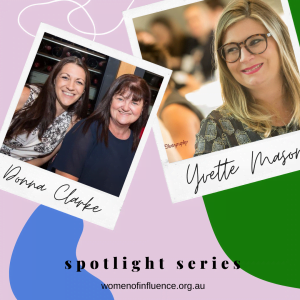 This week’s Spotlight series features Donna Clarke and Yvette Mason – both such important committee members and wonderful friends.  We hope you enjoy this spotlight 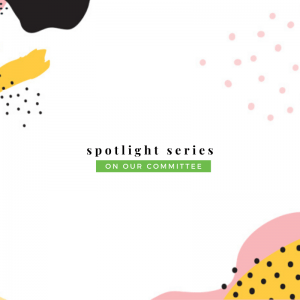 What have we all been up to You may have heard about the Women of Influence Spotlight Series, where we are shining the light on